Is Oculus Quest compatible with iRacing? 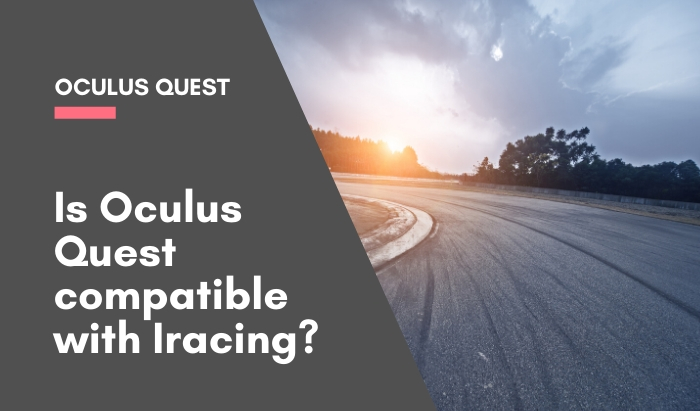 Do you want to buy a virtual reality headset but you don’t know if oculus quest is compatible with iRacing?
It, is not. However, there are a few ways you can still make this work.

Check the video below:

What kinds of devices are used in SIM racing games?

The fact that virtual drivers are networked and share a single virtual track in real time, adds a sense of reality that only increases with the use of devices similar to those of an authentic vehicle.

Therefore, there is a wide variety available and there are more and more SIM racing games that require them. These are the most common devices:

Steering wheel/pedals: They simulate driving in touring cars (three pedals, 5-6 speeds) and in formula cars (two pedals, dozens of buttons and controls on the steering wheel).

They have force feedback technology, which transmits different sensations of movement to the driver through response forces (engine vibrations, steering wheel hardness, banking, impact with another vehicle, etc.).

Radio: Since they are competitions where tracks are shared with dozens of drivers, instant communication is essential. This is why they often use earphones with a built-in microphone as a “team radio”.

Display: It is common to use three monitors to generate a greater sense of immersion and if they have curved screens, much better! But, the use of VR headsets is more common for racing games.

Movement: Although the software is usually prepared to transmit the movement of the shock absorbers and the inclination of the vehicle, some players look for a motion simulation system using hydraulic articulating arms.

Racing simulator cockpit: There are both domestic simulators with an appropriate table and chair, and sports seats with support for three monitors. It’s up to you, but the last one is perfect for playing iRacing!

It is a subscription SIM racing simulation video game developed as a competition service; it organizes and officiates online racing on virtual tracks worldwide and allows experiencing what it feels to be a professional NASCAR driver and a Grand Prix or a Formula driver.

The game simulates real cars, tracks, and racing events. You can choose between different vehicles that are practically indistinguishable from the real ones. This creates a wonderful immersive effect that is worth trying, don’t you think?

iRacing is the leader in SIM racing because you can join any of the online racing leagues in any category, such as NASCAR, Grand Prix, Sports Car, and Dirt & Rally Car racing.

Also, even if you start as a rookie, everything you need for your rookie season is included in your membership. You just have to worry about having a computer equipped with one or more USB ports, a digital wheel/pedal and a high-speed Internet connection.

Although, it is compatible with the most popular VR headsets, which literally put you in the driver’s seat and provide an incredibly immersive experience. Do you want to play?

Why is iRacing the best game?

There are many reasons why this game is the best, not only for its graphics, realism and a variety of cars, equipment, tracks and for receiving support from important companies. So let’s talk about some of them:

24/7 Competitions: Regardless of the time at which you want to compete or the car you want to use, iRacing will always offer you full tracks for you to play.

Relive every moment: Besides competing with real drivers, fixed schedules and calendars, you can also watch your racing again with commentators who offer a complete competition environment.

Team competition: Check on Twitter the existing teams of the best SIM racing game. Each team has an image and personality; you can choose the one you want and fight to get a position.

Private competitions: The iRacing system offers both team and private championships, where any driver can participate, whether they have experience or are rookies.

Updates: There are constantly new updates that improve and make iRacing the best racing game.

Press: There are media that inform about simulator updates. They also have interviews and news about the world of racing.

Although the game has wonderful features, a very important disadvantage is that the game is a bit expensive, but it is worth its weight in gold, taking into account the realism and immersive experience it offers.

Is Oculus Quest compatible with iRacing?

Well, the first thing you need to know is that the Oculus Quest is a stand-alone device that cannot be connected to a PC; that is, it is wireless and it has two controllers that offers an immersive and quality experience.

And VR racing games are the best experience you can invest in, because you are totally shut off from your surroundings and immersed in a virtual world where you will become a real driver, at least in the game!

But, be careful, there are definitely motion sickness issues with VR. Just take it easy at first, the good news is that you will likely get used to it very quickly and you will enjoy it very much!

Besides, there is another demotivating disadvantage of iRacing; although the game adapts very well to virtual reality, the Oculus Quest cannot connect to a computer, so you cannot connect with other drivers in the network either.

You can use the Oculus Quest, but it would be a video and not a live streaming; this might not be the experience you are looking for when playing this SIM Racing game, isn’t it?

Even so, we should not lose hope that in future updates, the Oculus Quest can adapt and get connected to the network wirelessly, making iRacing the perfect candidate to spend hours immersed in the virtual world offered by this wonderful technological advance.

You should not forget that vehicular behavior physics are a key factor in the experience though. Remember that you must handle the basic concepts of car handling, as well as the handling techniques and the precision that is required when making complicated maneuvers.

But, don’t worry! Practice makes perfect, and over time you will understand and master all these aspects to become the best iRacing driver. Good luck!