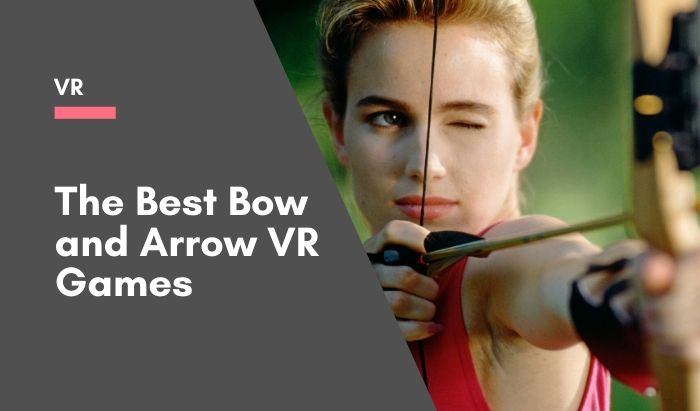 With Virtual Reality we find a new and better way to live and enjoy the experience of video games. Thanks to this mode, not only your mind is connected to the game. You also feel that your whole body is inside it and you can even use your hands in different and new ways. The same happen with videos games with bow and arrow.

VIDEOS GAMES WITH BOW AND ARROW IN VIRTUAL REALITY

You have a huge list of titles and playable options to choose from. Can you imagine experimenting video games with bow and arrow? Surely, when you enjoyed those movies where the main weapons were bow and arrow, you were curious to prove how good you could be in that.

You will find a good way to practice and fine-tune your target shooting with some virtual reality video games with this excellent modality. If you are constant, surely you will soon be the best archer.

In the beginning, the catalog of options offered to us was not so extensive and varied. With the course of time, many games have been developed. Besides, the new games allow and facilitate wonders that existed only in the imagination some years ago.

Nevertheless, technology has been highly refined. Thanks to this, virtual reality is not just enjoyed as a simple 3D movie but as a lot of more.That’s why HTC Vive, Oculus Rift and even the PlayStation VR now offer authentic video game experiences.

Those have been modernized thanks to all the possibilities offered by virtual reality. If you like and you are attracted to the idea of ​​immersing yourself in a world where you defend yourself and fight with a target, we invite you to look for video games with bow and arrow options.

If you are fond of the arch, but you have not found a way to prove your ability this is your game. In it you can act in defense of your castle from the invasion, so you can not hesitate to experiment with this game.

Guaranteed that you will not have the slightest boredom and you can even do some exercise. With one hand in the bow, in the other, the arrow and with your special glasses, you will be ready to defend the castle door. You can even add fire to your launch.

An easy and intuitive game where with a simple command button you have full control of your bow and arrow.

It is a way to handle bow and arrow realism in virtual reality. The important Fast Travel Games studio creator of great titles within this industry has a new objective. Now, it wants titles in virtual reality with a greater content of social elements and with a broad history narrative.

We can already find his first title called Apex Construct. Although it still does not present a release date, it anticipates that it will be released exclusively on PlayStation VR arriving later on HTC Vive and others.

It is a title to live great adventures in an environment that takes you to the possible and distant future where, by the constant arrogance of man, a new Robot society emerged lurking in every corner.

You will only have a bow and arrow to cross and survive this world on a journey that will lead you to discover even more obscure and unimaginable secrets.

The creator of this title reminds us that in order to feel a true immersion in virtual reality, it is necessary a mind, that not only focuses on realistic movements. It is also must emphasize in how credible it feels in it and how well the player can interact with it. To achieve that, Apex Construct was created with a lot of concentration.

YOU NEED SOMETHING MORE THAN ABILITY TO CONTINUE

In this game, it offers you the handling of bow and arrows with a more real mechanics. Therefore, you have to keep in mind that in order to move forward, you will have to resort to something more than your bow and arrow skills.

To stay alive in this world you have to have very fast reflexes and mental agility. Nothing should distract you. With Apex Construct you must also solve a variety of puzzles.

Players using their motion controllers will solve them and find in them data that reveal more about the history of that broken world.

It is played in the first person and there are many tools available to be a glorious survivor in that post-apocalyptic world. With two artificial intelligences that are closed in a long conflict, you will feel like the only surviving human.

You will discover in the exploration of that world that mostly all organic life has disappeared. Only with your ingenuity and skills can you survive.

Using both hands, you will have control of everything and with the possibility of moving freely and by teleportation. You can choose many things to get out of battle. To fight, you will use an updatable bow. To dodge attacks you will have a shield.

The mechanics of action is very similar to that of archery in real life and you need a lot of precision to hit the target. There will be times to face several enemies at the same time where you must attack and defend yourself at the same moment.

You can find several types of arrows and each with a special function. For example, some are ideal to derive certain types of enemies, while others will serve to derive doors and advance.

With the progress of the tour, you discover secrets that take you to other levels. In these levels you will have the option of returning to another mission where you did not discover the secrets on the first occasion. In other words, you will have to solve all the issues.

Although this is a game that is not really in virtual reality it offers you a 3D effect. That’s why game physics is very realistic. For those who want to implement their aim without the use of firearms, this is a game to apply the archery or rather the shot to the fruit.

You will also find long hours of fun using bow and arrow. On this occasion, you must aim at a fruit with a shot that manages to destroy it completely. Sometimes, it will be on someone’s head so you should be very careful not to hurt the person.

As you progress through the game, greater challenges will arise. So, you must have better and more accurate shots because the target will be more complicated. This game is very entertaining for all ages. So, you can install this 3D archery simulator for free on smartphones or tablets.

It is an arch made of a non-toxic material that can be used by adults and even children from 6 years old without any risk. It is safe and healthy. It can be downloaded to install this application by activating the Bluetooth to your smartphone through Google Play or App Store.

With this very carefully developed arc, you can enjoy AR games or non-AR games. Its function is suitable for any smartphone. Your target is detected by the phone’s gyroscope and is fired when you pull the bowstring.

Its use makes the game much more exciting by integrating the real world with the virtual world and thus the player visualizes and enjoys that interaction.

Its arrow is augmented reality and comes with its adjustable support and a variety of games appropriate to its style. According to its regulations, the bow and arrow in 360 degrees allows better movements and better tracking of the objectives.

OTHER TITLES OF BOW AND ARROW IN VIRTUAL REALITY

We have much more fun of bow and arrow in virtual reality. Let´s see some of them.

In this game, you can play an archer with magic power in a world where the black magic is all around. The task is to find a magical stone that will give you the power to control dragons. You will fight a lot of battles with mythological creatures and monsters. Besides, you can choose the way you perceive the game.

You can kill a lot kind of orc that try to get in the city. You can play alone, but you can also play with other player around the world online.

In this spectacular game of virtual reality, you can move with a freedom of movement that only virtual reality can do possible. Certainly, your fights are in other level.

Here, you really will have the bow and arrow in your hands. The task is defending your castle and the powers that are inside of it. The enemy never stop and for that reason, you will have to fight for your own security.

A lot of to choose, you have many options for playing and showing your physical skills, don´t lose your chances.