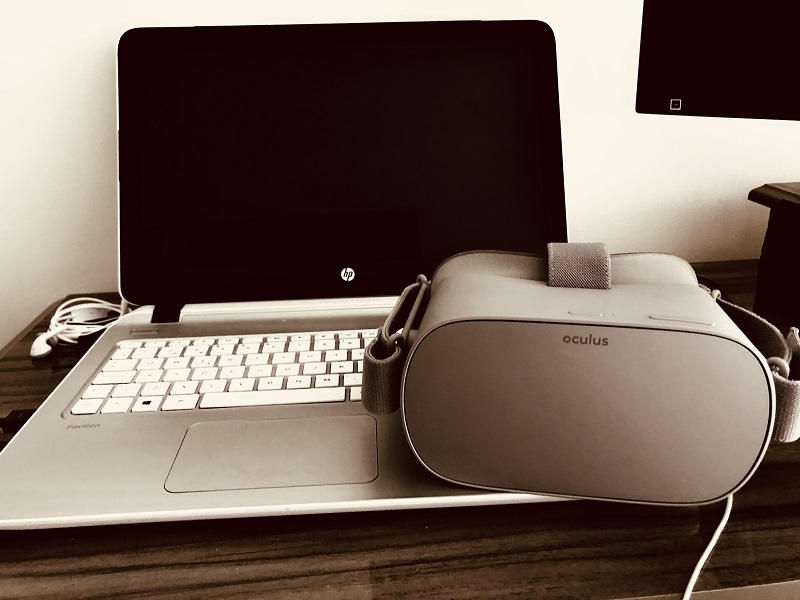 Virtual reality headsets have been quite popular from past couple of years. They come in two categories. One category involves the headset to be connected to a computer or a console and the second category allows it to be powered on by a smart phone. However, the second category changed with the introduction of Oculus Go headset. It is not the flashiest or most high tech headset on the market but it supports features similar to that of a Oculus Rift and Samsung Gear VR headset. Moreover, its simplicity and affordable prices attract significant amount of buyers who opt for Rift earlier on.

Being completely wireless it eliminates the need of purchasing or connecting to a powerful desktops and consoles. It doesn’t include full motion controllers or futuristic inside out tracking technology which allows users to walk around rooms. You can rotate your head but not lean or walk around. It is similar to Oculus VR versions made before however, the best thing about it is that it eliminates the need of smartphone or a plastic shell.

Oculus Go comes with a screen which can run at 60HZ or 72HZ, meaning the screen can display up to 72 images per second. The headset itself is powered by a Snapdragon 821 mobile chipset, like the one found in many smartphones. It’s battery pack offers 2 hours of gaming and up to 2.5 hours of video playback. Built-in speakers and a microphone complete the package, with a 3.5mm headphone jack available for private listening.

With all these features pertaining at providing crisp VR content with decently smooth visuals, you are able to enjoy a magnificent gaming experience. Made out of breathable fabrics and injection molding allow Oculus Go to feel light and comfortable. Its adjustable strap holds the headset gently and securely in place.

A smartphone is required to set it up, you would need to download an Oculus app for this purpose. The app guides you on the basic setting up procedures and control operations. It also includes tutorials on how to use Go with glasses or attaching a lanyard to the controller. After setting it up properly, you are required to get acquainted with handheld controller and main menu. By selecting your home back drop, you can explore various apps and games or download new ones directly on the headset.

In addition, it also allows you to socialize with virtual avatars in spaces designed mainly for this purpose. You can enjoy watching a movie or playing cards around a table with avatars. These virtual environments can be customized according to your preferences.

Oculus is trying to work on and introduce more social experiences on its devices. A new VR app called Oculus venues is designed for watching concerts, stand up comedy, Baseball games and other live shows. You can also enjoy 360 degree videos such as schlocky Campfire Creepers anthology, directed by horror filmmaker Alexandre Aja. You can enjoy a high tech gaming experience through Oculus Go which offers a lower price.

The audio system which Oculus Go has to offer meets all high tech requirements. It is loud enough to drown out the outside world, but not fill a medium size bedroom. Its build in speakers are the best when you’re planning on playing a horror or a shooting game. The audio offers an exceptional sound. Moreover, with its voice search feature users can launch apps, re-center their view or cancel out on a game by simply speaking relevant commands.

Oculus Go is famous for being a wireless VR headset. Unlike Rift and Gear VR which require long cable cords to be connected on to pc or desktops in order to work, the Oculus Go free its users from such setting. Your Go can be easily connected to a pc. This is probably one of the most attractive feature of Oculus Go besides being very cheap.

But some user crave for an immersive experience on the big screen which they can enjoy with their family, friends or just by themselves. And how amazing it would be if you could get this experience on a device which offers reasonable rates. The good news is it is all possible. The creators of Oculus Go identified this need from the very beginning and constructed a device which can be wireless and can be connected to a pc or a desktop both.

This is made possible through a free app known as Big screen. This app can do wonders. Through this app you can stream your PC’s display output to the Oculus Go, essentially which makes it an external display that you wrap around your head.

Big screen happens to be a very powerful software which can be used across diverse VR platforms. Not only it helps in streaming content from a PC to a VR headset, it aids in creating virtual spaces where users can interact with different avatars. This socialization feature creates excitement and provides new ways to explore people on the same platforms from across different parts of world.

You are able to interact and play games in private rooms, connect with new people in public spaces. This entire experience can be made customizable according to the users preferences. You can select from multiple environments and socialize accordingly. This app also allows you to watch 3D movies.

In addition, this app also makes it easy to enjoy regular 2D games on enormous theatre like displays. Through this way users can also leverage from content sharing across different mediums, users can host Tv nights and watch plenty of movies.

It is also equipped with a drawing tool for like a game of charades. This feature however, is still in its beta process therefore it’s expected that more features will be added with more upgrades. This upgrades will include software which will aid in supporting playing of local videos files saved on the device. It will also include enhanced social experiences offering a more in depth friend system. Lastly, some new options for creating custom avatars for you to play with will also be offered where you would be able to better express yourself.

How to Connect Oculus Go to Pc

Stream Videos and Files from PC to Oculus Go headset

Videos and files form your pc can also be streamed into your Oculus Go headset. You would need to follow the following instructions in order to do that:

Go when used in its original form works best, as no user likes their headsets connected to big bulky desktops. However, being equipped with pc connection capability is a plus. Users who are on a budget and who want to experience the VR world on a big screen for full entertainment or transfer content from their laptops to their headsets have a solution now. Starting at $199, Oculus Go offering intriguing apps and games in vibrant color and immersive spatial audio is your one stop solution for a cheap standalone VR headset.